The World Of Lily Allen 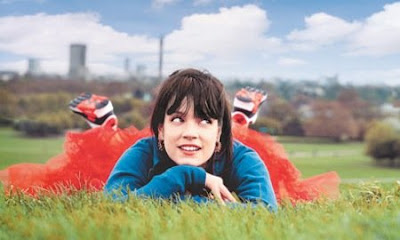 And so, in Lily Allen, we have another act who has apparently gone on “hiatus”. Allen has recently played several ‘final’ gigs, but me being the eternal pessimist, I think it will only be a matter of time before her third album is on it’s way. At least, I hope so. Allen is one of the more intriguing pop stars the UK has produced - her brash lyrics have set her aside from potential contemporaries, and the electro pop stylings of her last LP, “It’s Not Me It’s You”, made that record one of the best of 2009. Allen, it could be argued, has also been instrumental in helping lead the media fascination with female singers in recent years, which whilst at times is the sign of nothing more than lazy journalism, has at least helped give a bit of coverage to these acts who might otherwise have struggled to get on the radio. To commiserate her current retirement status, here’s a quick look at the world of Keith Allen’s daughter - any article about Lily Allen HAS to mention that… 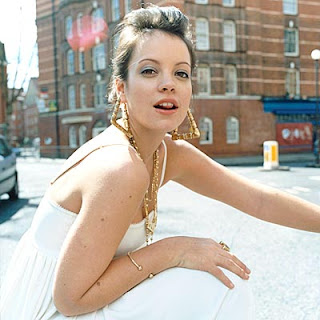 Allen’s breakthrough has very much been credited to the power of the internet. Although she signed a record deal way back in 2002, little progress was made during her early years in the industry. Her then manager, George Lamb (yes, that one), stuck with her as she stepped away from music, then decided to have another crack, signing to EMI subsidiary Regal. In the fall of 2005, Allen started posting demos on her MySpace page. The buzz surrounding these demos was huge, and Regal issued a limited edition 7” of “LDN”, Allen’s upbeat sounding but rather downbeat lyrically account of life in London, a subject that would inform much of her debut album, “Alright Still”, which was issued in 2006.

The interest in Allen following “LDN”’s release was now significant, especially for an artist so early into her career, and she found herself the recipient of media coverage which, at times, was of a level normally reserved for a more established artist. As a result, when second single “Smile” was sent out to radio, it was A-listed on just about every station going, with the hype surrounding Allen growing by the minute. “Smile” was a huge hit, going to number 1 in the UK - although like “LDN” it sounded bright and sunny, the lyrics were dark and controversial, complete with a video which some claimed was “pro-violence”, featuring as it did scenes of Allen hiring a gang to beat up an ex-boyfriend.

“Alright Still” was released soon after, and was the recipient of excitable reviews. It’s most notable influences were Ska and Reggae, music that Allen had grown up listening to, but infused with a pop sensibility. There were other styles on show upon closer inspection - album closer “Alfie” sampled Sandie Shaw’s “Puppet On A String”, whilst “Littlest Things” was the closest the album got to a ballad, held together with a beautiful piano melody. The b-side of “LDN”, “Knock Em Out”, was included on the album, and I am informed the version of “LDN” that got included was a slightly different mix, although I can‘t tell the difference. I seem to recall hearing that the original mix of “LDN“ included an uncleared sample, which had to be removed for the album, but I can‘t track down anything on the internet that backs this up. “LDN” was then issued as the next single, followed by “Littlest Things” and a double A-side release of “Alfie” and “Shame For You”, the former written about her brother Alfie Allen. Lily’s image at the time of the LP’s release was a fascinating mix of glamour and street - gigs could see her decked out in a ball gown with Adidas trainers, and her unique image made her just as notable a performer, from a visual perspective, as the likes of Alison Goldfrapp or Beth Ditto. 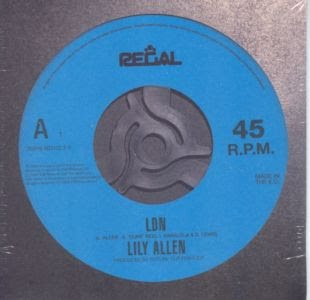 In collectors terms, all of Allen’s 7” singles from the first album were housed in die cut sleeves, as opposed to being issued in full picture sleeves. The original “LDN” featured a small sticker in the top left detailing the track listing, later releases featured big stickers across the top of the sleeve, with “Littlest Things” featuring a B-side not available on the accompanying CD Single release. Each of these releases featured different coloured labels, and the sticker was the same colour as the label. Promo CD releases for “Smile” onwards came in picture sleeves which featured a photo of the 7” label (but with the vinyl catalogue number removed), and all featured exclusive material - “LDN”, “Smile” and “Littlest Things” all featured an instrumental mix of the relevant track, whilst the “Shame For You“/“Alfie“ promo featured the radio edit mix of the latter. Some of the commercial releases of these 45’s were issued on two CD Singles, with different sleeve designs, with the B-sides being a mix of “new” tracks or remixes.

2007 and most of 2008 was spent indulging in non-”Alright Still” work - Lily landed her own TV chat show, “Lily Allen And Friends”, which unlike Charlotte Church’s show, saw Lily avoid actually singing anything on the shows, with musical guests appearing instead to plug their latest product. A single with Mark Ronson, a cover of Kaiser Chiefs’ “Oh My God” was released, after it had originally been recorded for Ronson’s “Version” album - the single came backed with a remix featuring Busta Rhymes, with “clean” and “explicit” mixes of the remix available on either the 10” or CD formats. The video featured a cartoon Allen, but the Kaiser Chiefs made an actual physical cameo appearance as themselves in the clip. Allen has also collaborated on several other singles, appearing with the likes of Common and Professor Green, but whilst she did all the vocals on “Oh My God”, these singles only featured her on parts of the song. However, an often overlooked gem is her duet with Jamie T on “Rawhide”, which appeared on the B-side of his 2007 single “Sheila”. 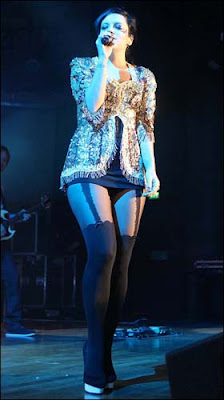 At the tail end of 2008, Allen’s first single from album number two was unleashed to TV and Radio. “The Fear” was a remarkable return, showing Allen’s movement away from the Ska influenced Pop of the first record, to a bigger, more electronic sounding style of music. The lyrics were still direct and explicit (“I want loads of clothes, and fuckloads of diamonds”) but the melody seemed “fuller” than anything on “Alright Still”. Early in 2009, “It’s Not Me It’s You” was released to ecstatic reviews, with some critics (rightly) claiming it was a leap forward from the debut LP. Plenty of songs, as well as “The Fear”, were heavily reliant on melody and sound, whereas the debut had been stuffed full of samples on virtually every track - “Everyone’s At It” was a swirl of synths, “Chinese” featured some beautiful vocals on the choruses (the greatest single that never was, as far as this LP goes), and the whole record was hook laden throughout. The image was also now more glamour than street, with Allen wearing wigs at some shows, and rather revealing costumes at others.

The second single, ”Not Fair”, complete with comedy “country and western TV show” video, was a brave choice of single, dealing explicitly with a story of a bad sexual partner - Allen later admitted that having to change the line about “I spent ages giving head” on TV shows made her laugh, her favourite replacement line being “I spent ages kneading bread”! The third single in the UK, “22”, would be the last to gain a major physical release, as the follow up, “Who’d Have Known”, was only ever released as a promo and digital single in the UK, although a video famously co-starring an Elton John lookalike was shot. The couple had had a very public row at the GQ awards the previous year, although the spat seems to have been two friends having a row, as opposed to two enemies hating each other. This was not the first time Allen had “fallen out” with a fellow pop star, her relationship with Girls Aloud’s Cheryl Cole also being famously frosty since day one. “Who’d Have Known” bore a striking similarity to Take That’s “Shine”, and Allen dueted with the band on a “mash up” of the two songs at a BBC Children In Need gig in London at the end of 2009.

Two other songs from “It’s Not Me It’s You” were issued as singles - “Fuck You” was released in France, but not in the UK, and utilised the B-side from the UK CD edition of “Not Fair” as the second track on the CD. In 2010, “Back To The Start” was issued as a limited edition 7” as part of National Record Store Day - only a thousand copies were pressed, but unlike other EMI acts who offered up exclusive material for their releases (Bat For Lashes, and Hot Chip, to name but two), the B-side was a previously released song, “Kabul Shit”, which had appeared on the flip of “The Fear” 7” Picture Disc. 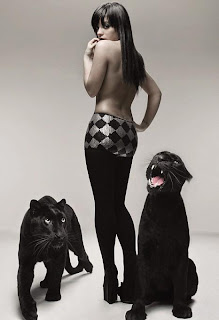 Of the three “normal” releases in the UK, all were issued as two track CD singles and 7” picture discs, with the same photo adorning the front of each, although - as is standard - the picture discs were housed in clear sleeves, rather than picture sleeves. The b-sides on each format was different, and even though edited mixes of “The Fear” and “Not Fair” existed, the album mixes of each were used on both formats of each single.

During 2009, “It’s Not Me It’s You” was reissued as a deluxe double disc edition - the CD featured a slab of acoustic versions, remixes and new songs (covers of Britney Spears’ “Womanizer”, a feature of Allen’s live set at the time, and ELO’s “Mr Blue Sky”), with a DVD featuring footage from an early gig of the 2009 tour and several “It’s Not Me” promo videos, including “Fuck You“. The package came in a new sleeve, although the two discs were housed in a normal jewel case tucked inside a slipcase, and the original CD cover sleeve was again used on the front of the inlay inside the jewel case.

As I type this, Allen’s forthcoming “last” gig seems to be a support slot for poor Pink Floyd copycat band Muse, which should see her blow them off stage - will this really be her curtain call? If it is, then we will have lost another proper pop star from our charts.

Listed below are selected highlights from Lily’s discography. The CD editions of the albums are detailed, along with all formats of all commercially released singles (including “Oh My God”). I have also listed details of the promo CD’s for the singles from the first album, as these are all interesting items to own, both in terms of their artwork and track listings. Promo CD’s for releases from the second album often featured rare mixes, but used standard artwork. The Discogs link below is worth a view, as it details other promo releases I have decided not to cover here.