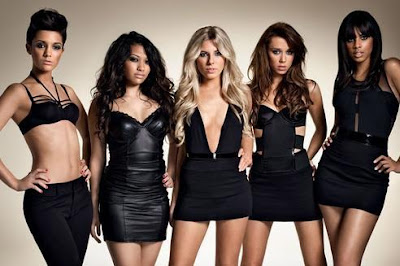 With the return of Girls Aloud being put back on a regular basis, what with Cheryl wanting to make it big in America, it’s at times like these that we need to look for a new girlband to obsess over. And, as former tour partners of GA, The Saturdays are leading the pack. OK, so they haven’t quite done a “Love Machine” or a “Biology” yet, but there are some pop gems tucked away on each of their albums. And with a number of FHM shoots under their belt, it’s not just the teenage girl crowd who have discovered their charms.

Signed to the same label as Girls Aloud, the group emerged in 2008, debuting with their Yazoo-sampling “If This Is Love”, a fine piece of electro-pop. But it was with the follow up, “Up”, that they really started to show what they were capable of. With it’s incessant punchy keyboard rhythm, and a video in which the girls jumped around with each group member wearing differently coloured blindingly bright tights (so you could tell who was who), they started to emerge from the Girls Aloud shadow. If the debut single was just another good song by a five piece girl band, “Up” was the point at which Frankie, Mollie, Una, Rochelle and Vanessa started to become famous, not just as the latest pop sensations, but as five individual pin-up girls - it was the law that you had to pick your favourite (Frankie, it seems, is everybody’s favourite Saturday). 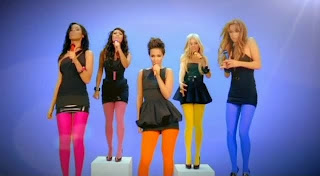 “Chasing Lights”, the group’s first LP, was released in October 2008. It got good reviews all round, and covered most ’pop’ bases - some upbeat moments here, a ballad or two there. “Issues”, a mid-tempo, harmony-filled slowie, was the next single release, surfacing in “single form” at the start of 2009. With the band still relatively new on the scene, they invited fans who bought the single to send the sleeve to the record label, where upon each band member individually signed the cover and sent it back. I think they are a bit too big to do that sort of thing now…

The band then got the nod to do the official 2009 Comic Relief single, and decided to give Depeche Mode’s “Just Can’t Get Enough” a bit of a rave-style makeover. For the video, the girls got dressed up in some rather revealing outfits, and paraded around on screen in stockings and suspenders for most of the video. There are few better sights in music than Frankie Sandford hitching up her skirt and flashing her derriere at the camera at the end of the video, although whether or not this sort of thing should be going on in what was a charity single, I wouldn’t like to say! “Chasing Lights” was later reissued with the song added as a bonus track - unlike the original edition of the album which came in a DVD-style “curved corners” case, the reissued version of the album came in a standard “square” sleeve.

The band soon after were heading off on their first proper “live” tour, the “Work” tour. The tour took it’s name from a song off “Chasing Lights”, which was then issued in remixed form as their next single. Unlike other pop acts, all of the band’s singles had been issued not just as digital releases, but on CD, with all five of them coming with non-album B-sides - a tradition they have continued to this day.

No sooner had the tour come to an end, than news of the band’s next album was being announced. Work on the “Wordshaker” had begun whilst they were on tour, and it’s release came less than a year after “Chasing Lights”. The lead single, an edited mix of “Forever Is Over”, was fairly indicative of the album’s sound - loud, banging, roaring pop, the sort of song Klaxons might have made if they were a bunch of girls. The album is a bit of an under-rated gem, with the up-tempo songs being brash and in-your-face, wonderfully noisy and brilliantly catchy. A slightly edited mix of “Ego” was the next single, and although it had an official release date of the first week in January 2010, a handful of copies were actually put on sale in some HMV stores immediately after Boxing Day 2009. 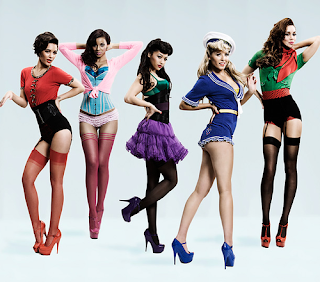 With “Wordshaker” barely six months old, the group prepared yet again to issue more new music. They had, “in the vaults”, songs which they didn’t want to disappear, and decided to issue a mini album showcasing this material in the second half of 2010. “Headlines” was an 8 track CD, with a running time just short of half an hour. It consisted of five new tunes, the single mixes of “Forever Is Over” and “Ego”, and a remix of “Wordshaker” album track “One Shot”. The band came in for a bit of stick over the release, with some claiming that had they just released the five new songs on an EP, they could have kept the price down. To counter such claims, selected copies of the album came shrink-wrapped with a huge fold out poster. The only problem was, once you removed the shrinkwrap, the package effectively “fell apart”, as the poster was housed behind the CD casing.

The first of the five new songs to be issued as a single was the ballad “Missing You”, which benefited from some blaring Ibiza-compilation-CD style keyboard noises. The original band logo, ditched for a new one for the “Wordshaker” releases, made it’s reappearance on this single. The band performed the song at T4’s “On The Beach” TV show in July, before “Headlines” was issued in August.

A second track from the album, “Higher”, was the next single release. This was a different mix to the album version, and the singles mix also contained a superfluous rap from R&B nobody Flo Rida. Thankfully, even this pointless addition could not ruin what was a genius pop moment, arguably the best song the band have ever recorded. “Headlines” was later reissued and expanded to album length, by including the Flo Rida version of “Higher” and three more songs from “Wordshaker” as bonus tracks. There is no obvious sign - on first viewing - as to whether a copy of "Headlines" you might see in a shop is the 8 track or 12 track version, until you look at the back of the CD.

2011, and the band are about to head out on the fesitval circuit - usually an indicator that they have been accepted by most as proper pop stars, apart from the indie snobs on the NME message boards. Whilst the likes of Girls Can’t Catch have come and gone, and the jury remains out on the likes of Parade, it seems The Saturdays are our only hope of keeping the Girlband Pop sound alive. Frankie and Co, we salute you!