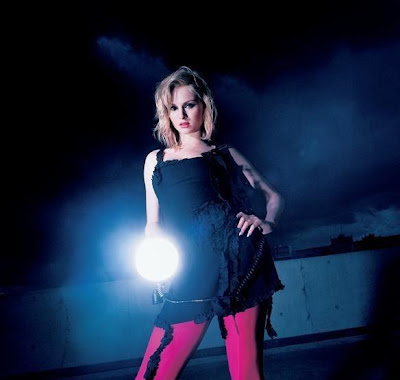 Doesn’t time fly? Next year, it will be 15 years since the release of the first single by Theaudience, whose lead singer was none other than posh pop princess Sophie Ellis-Bextor. Whilst the band themselves survived for no longer than a handful of singles and an album, Bextor (as we she call her in the interests of saving me having to type that double barrelled name too much) has now been doing the solo rounds for over a decade. She may not quite be as omnipresent as she was when she first emerged, but she has managed to release no less than four albums now, the latest being this years “Make A Scene”. With quite an extensive discography now behind her, this is as good a time as any to look at those releases. 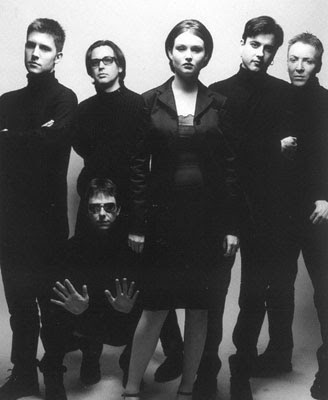 With an obviously clever bandname, allowing the band to say at gigs “we are Theaudience, and so are you”, Theaudience emerged in the middle of Britpop in 1997. They were one of a number of female fronted bands that would later get grouped together by journalists as part of a so called “scene” - each of the bands in this “scene” consisted of a glamorous lead singer plus assorted “Sleeper Blokes” (a phrase coined by the fact that nobody could remember the three male members of the Louise Wener fronted guitar band, Sleeper). Bextor didn’t quite fit the indie pop mould - that double barrelled name, her sophisticated glam look - and that gave the band a bit of an edge over their competitors. The band were a six piece, with lead guitarist Billy Reeves taking the lions share of the song writing duties.

They were signed to Mercury offshoot Elleffe, and released their debut single “I Got The Wherewithal” in 1997, the first of several brilliantly titled singles. It was issued as a 1000 copy only red vinyl 7”, and a relatively rare CD, which featured both tracks from the 7” plus two bonus tracks. When the band started to make waves in 1998, the price of these releases rose quite quickly to the £20 mark, although I seem to recall getting hold of the CD in a second hand record shop for about £2 when these prices were still being quoted, which suggests that maybe their value has dropped.

The band headed out on the NME package tour in early 98, and released their second 45, “If You Can’t Do It When You’re Young, When Can You Do It” to coincide. Promo copies featured slightly a different annotation of the title compared to the commercially released 45. It gave the band a top 50 chart position, helped along with the video getting some rotation on MTV, and set a precedent for all future releases by the band - Sophie, with no other band members, was featured alone on the cover of the record. Again, a coloured vinyl 7” was issued, and the photo from this sleeve was later used on a belated US release of “Wherewithal”. A live recording of “You Get What You Deserve”, taped at the London Astoria on the package tour on 25th January when it was still known as “I Never Have Been Done”, turned up on an NME freebie CD “Clean Sweep” in March.

Two more singles were issued prior to the LP surfacing - “A Pessimist Is Never Disappointed” and “I Know Enough" - which in a cynical marketing move, were both issued on two CD’s and 7”, which obviously helped propel both into the top 30.The 7” editions of the latter featured an exclusive vinyl-only B-side.

The band’s self titled debut LP followed in August 1998. As you would expect from such a glam band, the vinyl edition was pressed on glittery vinyl, whilst the CD edition first appeared as a double disc set, with six bonus tracks, a mix of new songs and rarities. The lead song on the bonus CD, “Mr. Doasyouwouldbedoneby”, had first turned up on a Various Artists EP on the Fierce Panda label in 1997/98.

Although Wikipedia claimed the band split after a “disastrous Glastonbury performance”, the band’s Glasto show was in June 98 - before the LP was even out. The band toured in support of the record, including a slot at August’s V98 festival, and work even began on a follow up album. However, Reeves had quit the band by 1999 and the group fell apart.

Bextor’s solo career got off to what you can only describe as an interesting start. In 2000, she was invited to provide lyrics and vocals for a previously recorded dance track called “Groovejet”, recorded by DJ Spiller. The new version, known as “Groovejet (If This Ain’t Love)”, was issued as a single and famously ended up in a chart war with Victoria Beckham, the (at the time) ex-Spice Girl who was launching her solo career at the same time, with her own dance collaboration with True Steppers, “Out Of Your Mind”. When the chart was announced on the following Sunday, it was revealed that one of the most famous women in the world had been beaten to the top of the charts by a woman whose former band’s debut single had been limited to only a few thousand copies - see if you can work out which one is which! “Groovejet” has become such a famous song, it was later reissued as part of Positiva’s “Remixed” series of reissues in 2003, whilst several different overseas editions exist in totally different covers.

Bextor’s solo career would move away from the indie guitar leanings of Theaudience, and more towards the pop/dance sound of the Spiller record. Her debut single on her own, “Take Me Home”, was issued in 2001. Promo copies came in a “lipstick drawn” sleeve with Bextor’s name and a lipstick printed “kiss” on the cover. Her first album, “Read My Lips”, followed in August, and was promoted with a showcase show at the Scala in Kings Cross. Towards the end of the set, Sophie became so excited she hitched her skirt up and flashed her knickers at the crowd - some things just stick in the memory…

The album spawned a classic pop moment in the form of second single “Murder On The Dancefloor”, a gloriously perfect slice of music complete with a brilliantly darkly comic video, in which Bextor, taking place in a dancing competition, comes up with various ways in which she “removes” her competitors from the contest until she is the last one standing, and is thus crowned the winner. Bextor was starting to become a bit of a pop pin-up by this time - whilst the indie boys had drooled over her when she was in Theaudience (including me, of course), she was now starting to get the attention of the mainstream - and posed for the likes of FHM with little clothing on show.

A new song, “Get Over You”, was issued as a AA side with “Move This Mountain” in 2002, with Bextor undertaking her first solo headline tour. Another new song, “Music Gets The Best Of Me”, was released as her fourth solo single later in 2002, and “Read My Lips” was reissued with both these new songs added as bonuses the same year. A live version of “Groovejet” was tagged on the end, as an obvious “incentive purchase” manoeuvre, but - probably due to licensing issues - was a rerecorded live version from a Shepherds Bush Empire gig the previous May. The gig from which this version was taken was filmed and released as a live DVD, “Read My Lips”, in 2003. Included were bonus video clips of the singles, and - in a charming throwback to her former life - also featured three videos by Theaudience as well.

At the end of 03, a newly blond Bextor returned with a new single, “Mixed Up World”, a taster from her more electro/Pet Shop Boys sounding second LP, “Shoot From The Hip”. The album included a hidden bonus track in the form of a cover of “Physical”, originally by Olivia Newton John. The second single from the album, the much maligned (lyrically) “I Won’t Change You”, came backed with a cover of Baccara’s “Yes Sir I Can Boogie”. In what may or may not be a coincidence, Goldfrapp had also covered both “Physical” and “Yes Sir” by the end of 2003 as well.

After the birth of her first child in 2004, Sophie eventually returned to the world of pop the following year, with another dance collaboration. This time, she was billed as “Mademoiselle EB”, and sang on a song by Busface called “Circles (Just My Good Time)”. Her next normal solo release was in 2007, with “Catch You”, the first release from the “Trip The Light Fantastic” album, which continued her love of pop and dance. “Catch You” was released as both a CD Single and a 12” Picture Disc.

Two more singles from the album were released, “Me And My Imagination” - on CD and 12” Picture disc again - and “Today The Sun’s On Us” (CD only), which she plugged on “T4 On The Beach”. Just like at the Scala, there was more knicker flashing going on, although this time it was due to a combination of high winds blowing off the seafront and a ridiculously short dress.

In 2009, Bextor returned with the first of three dance collaborations that would surface before her fourth LP. “Heartbreak (Make Me A Dancer)” was recorded with the Freemasons, and was released as both a 4 track 12” and a CD. However, the final two tracks on the CD were Bextor-less, but it did come in a full colour picture sleeve, whereas the 12” was housed in a die cut sleeve instead. The next collaboration, “Can’t Fight This Feeling” with Junior Caldera, was only issued as a physical single in France - but both “Heartbreak” and this song would later turn up on Bextor’s fourth solo LP, “Make A Scene”.

Bextor’s only UK single of 2010 was “Bittersweet”, released as a (very early) taster of the album. It was issued on both CD and 7” Picture Disc, the latter featuring a remix of the A-side on the b-side. The album was originally planned to be issued during 2010 (and titled “Straight To The Heart”), hence the seemingly rather early release for the single. Another collaboration, “Not Giving Up On Love”, with Armin Van Buuren, was released as a single in Germany, and was the third collaboration included on “Make A Scene”, which was finally released this year.

Whilst Bextor hasn’t quite done the “Pet Sounds” of the pop world yet, there are some gems in the back catalogue. I can especially recommend “Shoot From The Hip”, which at times even hints at her indie beginnings. I have listed below the essential and almost essential items from both Theaudience and her solo outings. Again, any formats not listed are generally for the completists only, but the listing for Theaudience is more or less everything they released, as releases on anything other than coloured vinyl or CD are few and far between.