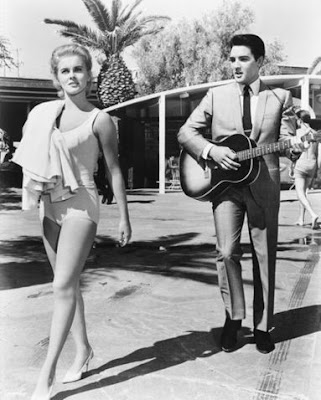 As mentioned in a previous blog, RCA released a 50-CD boxset during the second half of the 1990’s which included “all” of the albums Elvis Presley had released during his lifetime. Included in the box were a series of “Double Features” albums, concentrating on Elvis' movie albums, which actually cobbled together several Elvis LP's on one CD - and as such, were really compilations made after Elvis’ death.

Elvis had - like other 50s and 60s pop stars - dabbled in movies during the earlier years of his career, but starting in 1960, he began to make movies on a regular basis. By the mid 60s, Elvis was no longer making “normal” albums, but was only recording soundtrack albums. You can see why this happened. His career was being steered by the notorious Colonel Tom Parker, who figured that more money could be made by getting Elvis to star in a film, and then release a soundtrack album from said film, as opposed to going out on tour. Elvis, famously, never played a live gig outside of North America.

By 1968, Elvis the film star was no more - his NBC TV show, dubbed the “Comeback Special” was indeed a comeback - Elvis was back, a rock star once again, and all of sudden, you wondered why he had spent the sixties NOT making proper music. The Beatles, Beach Boys, The Stones, everybody had effectively overtaken him whilst he was dabbling in celluloid. And the fact was, even Elvis wasn’t too happy with the films - or the music - that he made during this period.

Although Elvis appeared in some 27 movies between 60 and 68, there were not 27 soundtrack albums. For some movies, there were only a handful of songs needed, and so EP’s were issued. For some of the later films, where the films tried to concentrate on Elvis The Filmstar, rather than Elvis The Singer, only one or two songs were recorded, and were housed on random Elvis releases. Indeed, of the 27 movies from the 60’s, only 13 full length albums were made. And of these, several LP's were a bit "short" of movie material, so unrelated Elvis recordings were used to pad out the sets. These bonus tracks "disappeared" from the "Double Features" releases.

I have detailed below the soundtrack albums that exist - I have listed first the films that spawned LP’s at the time of the film’s release, and then detailed the movies which resulted in albums being made at a later date, including the slightly oddball “Flaming Star” release. For all of the other movies which starred Elvis, but for which no EP or Album has ever been issued, this material is most easily available on the Double Features releases mentioned in the earlier blog, so I refer you to that article for further reading. Where the "Double Features" release omitted tracks because they were used to pad out the LP, these individual songs are detailed below. 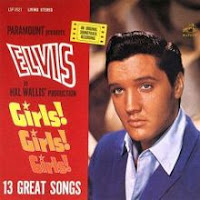 The six soundtrack albums that, when issued as part of the “Double Features” releases, retained their track listings. As you can see from the release dates, there was no real pattern as to when a soundtrack album needed to be bolstered by “extra” tracks, and releases from both the first half of the 60’s and the second half had to be padded out with bonus material.

With Elvis being such big business, it’s no surprise to note that a specialist reissue label, Follow That Dream (named after an Elvis movie) have reissued several Elvis albums in “expanded” form. Each such release on the label features additional bonus material, expanding the original 30-40 minute LP to CD length, mostly through the inclusion of alternate takes of the soundtrack material. “Girls Girls Girls” received the Follow That Dream treatment in 2007, with the bonuses consisting of the four extra tracks from the “Double Features” release and 15 other alternate versions. Expanded issues of “Worlds Fair”, “Harum Scarum”, “Frankie And Johnny” and “Paradise Hawaiian Style” also exist. 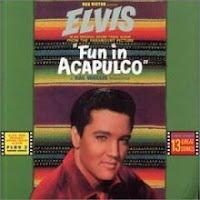 The first soundtrack release to be padded out with bonus tracks. The soundtrack was actually taped way back in January 1963, and - strangely - the two bonus songs dated from a LATER studio session, rather than being old outtakes.

A 2010 reissue of the original vinyl restores the two songs absent from the “Double Features” CD, and again there is a Follow That Dream expanded version which includes both these tracks and 14 additional outtakes. 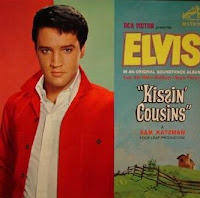 Elvis’ fourth 60’s soundtrack LP, “Kissin’ Cousins” again added two bonus tracks to the end of the album. The bulk of the album was recorded in September 63, and the bonuses this time were from “the past” - both tracks were from the same sessions that spawned “Love Me Tonight” and “Slowly But Surely” on the “Acapulco” LP.

For some reason, there has been no reissue on CD for this album since the “Double Features”. “Echoes Of Love” appears on the “From Nashville To Memphis: The Essential 60’s Masters” boxset. “It’s A Long Lonely Highway” was released as a US single in 1965, but does not seem to be readily available on any Elvis CD. 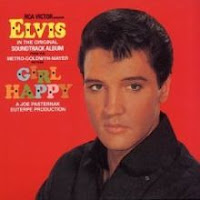 The only Elvis soundtrack to be bolstered with a single track, “You’ll Be Gone” was omitted from the “Double Features” pressing from the early 1990’s. The album has since been reissued in it’s original form on CD (from 2010 again), but an expanded release from 2003 also exists on the FTD label, which also includes “You’ll Be Gone”. 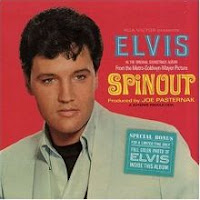 Spinout (October 1966)
Missing songs: Tomorrow Is A Long Time/Down In The Alley/I’ll Remember You

Another album that does not seem to have been given a recent reissue, “Spinout” included no less than three extra tracks on it’s original 1966 release. In 2004, FTD reissued the album in expanded form, which included the three missing songs, plus 13 extra alternate takes. 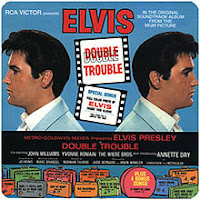 Double Trouble (June 1967)
Missing songs: Never Ending/Blue River/What Now What Next Where To

Again, no “budget price” CD reissue for this last year, but “Double Trouble” is again available in expanded form on the FTD label, with the three missing tracks restored, and numerous bonus songs. 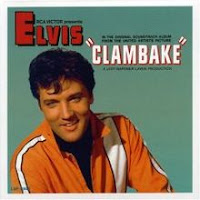 You’ll be pleased to know that this one has been issued on CD, although when I mentioned the title to somebody once, they just recoiled in horror. Not sure if this was horror at the film, the LP - or both! It’s worth pointing out that the 2010 reissues are very much of a budget nature - no real booklet as such, just a foldover inlay with the track listing inside, although the original rear cover of the LP is thankfully intact on the rear of the CD as well.

Whilst a lot of Elvis Soundtrack LP’s tended to stick the “bonus” tracks at the end, this one also included a mega hit, “Guitar Man”, at the start of the LP as well, arguably making this one of the more interesting Elvis Soundtrack albums. Running time still a bit scant though. A far lengthier “Follow That Dream” pressing also exists. 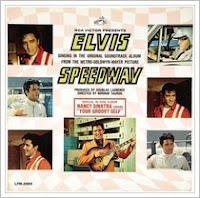 Apologies if I have got this wrong, but this one seems to be the most obscure Elvis soundtrack LP, along with “Kissin‘ Cousins“. No 2010 reissue, no expanded reissue from Follow That Dream either, so it makes those missing songs quite hard to find. It is worth pointing out that there are several “Elvis At The Movies” compilations around, which tend to collate bits and bobs from all these albums, and “Speedway” is one of them, so it is not impossible to find tracks from this LP on Compact Disc. 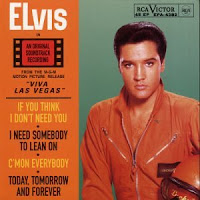 Well, mostly EP’s. These five films were not the recipient - at the time - of any sort of soundtrack LP, but songs from the movies turned up - usually - on an EP instead.

1961’s “Wild In The Country” was the odd one out, with the songs from the movie filtering out on a mish mash of releases. A Follow That Dream CD now exists, which includes the five original movie tracks, plus 22 bonuses (!!!) as extra tracks.

“Kid Galahad” appeared as a six track EP in 1962, and like “Wild In The Country”, no 2010 CD edition exists but an expanded “FTD” one does. Earlier the same year, “Follow That Dream” had turned up as a 4 track EP, led by the title track, and once more, there is no 2010 edition but there is an expanded FTD one.

1964’s “Viva Las Vegas” is another strange one. A four track EP was issued, but the famous hit of the same name was completely missing from the release, having instead been issued as a stand alone 45 instead. There now exists a “Viva Las Vegas” album, expanded to 12 numbers (including both sides of the 45 and the EP), with an extra-expanded FTD version in existence.

“Easy Come Easy Go” dates from 1967, and was a six track EP with the title track as the lead recording. A Follow That Dream release exists, which adds 15 extra songs. Before the FTD releases of all these EP’s, it means that the only “album” versions that existed were the “Double Features” releases from the early 90’s. Furthermore, with the FTD releases selling for hefty amounts, you best bet of owning these items on CD - “Viva Las Vegas” excepted - is to try and track down the relevant DF issues. This may also be your best bet for the “Kissin’ Cousins” and “Speedway” LP’s as well, if you can live without those missing tracks in your life! 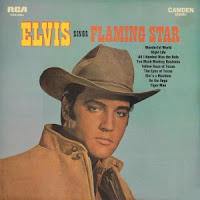 And so to the really odd one out. 1961 was the date of this one, and a four track EP, with the title track as song 1, was released. It was not much of a movie tie in, given that the tracks on side 2 were old Elvis mega hits “It’s Now Or Never” and “Are You Lonesome Tonight”, which weren’t even in the film. The other track on the EP, “Summer Kisses Winter Tears”, later turned up on “Elvis For Everyone”, before - of course - later appearing on the “Double Features” release.

In 1968, a compilation album called “Elvis Sings Flaming Star” surfaced. Initially released as part of a bizarre tie in with sewing machine company Singer, it was later released “properly” by RCA on their new budget label, Camden. It was nothing more than a load of random songs, including “Star”, taken from movies, but has been deemed important enough to warrant a CD release. It was the first release by Elvis on this imprint, but a load more would appear during the late 60’s and 70’s - and this is another area of Elvis that I hope to cover in a future blog.