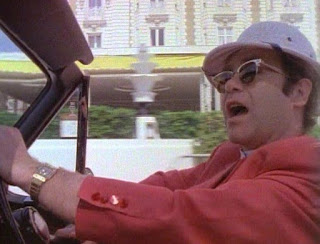 Let’s be honest. You are unlikely to find anybody who thinks that any of Elton’s 80’s albums are better than the best of some of those from the previous decades. But then again, just about everybody struggled in this decade. Bowie, The Stones, The Cure, they all lost their way in the quagmire of 80’s production.

But Elton, usually, managed to produce the odd hit single or two, and what is interesting about these records, is that they aren’t quite as obscure as you might think. Furthermore, Mercury seem to think that some of these albums are quite decent affairs, with 1983’s “Too Low For Zero”, 1985’s “Ice On Fire”, and 1987’s “Live In Australia” all being reissued in the 1990’s as part of the “Classic Years” reissue campaign.

As mentioned last month, the reissue of Elton’s post-DJM albums were conducted in two chunks - reissues of the “classics” in the late 90’s, and reissues of most of the rest in 2003. The reissue campaign stopped with 1992’s “The One”. Again, the lists below relate to the current CD pressings. For the singles, as ever, only essential formats are listed, but note that some singles were issued on other formats as picture discs or in different sleeves. 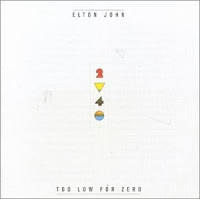 Although 1980’s “21 At 33” did feel, to a certain extent, like the beginning of Elton’s 1980s comeback, it was this 1983 effort that really pushed him back into the mainstream. It has been described as the album where Elton went ‘back to basics’, and after several years of collaborating with different lyrical partners, Elton reunited with Bernie Taupin on a far more permanent basis. Some critics will also lay claim to this being one of Elton’s best efforts, and his best since the classic LP’s of the 70s.

Whilst “Too Low For Zero” can feel, at times, like it’s just another 80s album, the singles taken from the album pack a certain punch - the lilting simplicity of “I Guess That’s Why They Call It The Blues”, the camp pop of “Kiss The Bride”, and the raucous ’I’m back’ rallying cry of “I’m Still Standing”.

Having dabbled with the format during his “disco years”, Elton released a number of singles from the LP on 12”, as well as issuing a number of new B-sides across these 45’s. Given it’s more “acceptable” critical standing amongst Elton’s back catalogue, the most recent pressing of “Too Low For Zero” includes a number of these B-sides, but not all. “Earn While You Learn” and “Dreamboat” are on the current edition, with - as mentioned last month - “The Retreat”, issued as a B-side in the UK in 1982 but not released in the USA until 1983. 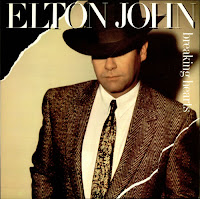 Another year, another LP. And another, as Wikipedia describes it, record full of “soft rock”. Once again, “Breaking Hearts” spawned a mega hit single or two, but - like a lot of the 80s albums - you probably need to listen to it a lot for the rest of the material on here to sink in. I have probably only listened to this record once, maybe twice in full, and I simply can’t remember what the rest of the album sounds like.

Although “Too Low For Zero” was seen as a critically acclaimed comeback record, “Breaking Hearts” is unlikely to feature in anybody’s “favourite albums” lists, although the two hit singles from the LP are fairly memorable parts of the Elton cannon. “Passengers” trundles along in a reggae/calypso style, and thus sounds unlike anything else Elton taped during the whole decade, whilst “Sad Songs”, a slightly more traditional sounding piano driven piece of pop, has stood the test of time, and you have every chance of seeing Elton play this if you go and see him in concert. Indeed, it seems like every time I see him play, he digs this one out.

Once again, a sizeable number of other singles were also issued, and various B-sides dished out yet again. However, for some reason, the most recent CD pressing of the album neglects to include any of these rarities as extra tracks. I can only assume that such is the album’s “not bad, but not great” reputation, that the powers that be would have felt guilty about increasing it’s stature by tarting it up with an expanded re-release. Still, it’s a bit odd that some of Elton’s 80s b-sides are available on CD, and some aren’t. 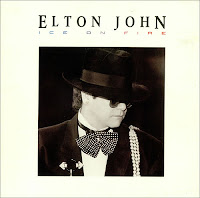 Following the release of the title track of “Breaking Hearts” as a 45, Elton released a stand alone single in the summer of 1985 - a duet with Millie Jackson, “Act Of War” appeared on a variety of different formats, with different mixes of the track on each format. Each mix was titled “Part 1”, “Part 2”, etc. and in total six “parts” were released. When Elton’s next LP was released, “Ice On Fire”, the first part of “Act Of War” was tagged onto the end of the CD edition of the album.

“Ice On Fire”, as you might have guessed, took it’s title from a line in one of the songs on the album, “Nikita”, which was issued as the next single. Like the singles from the “Breaking Hearts” album, “Nikita” became a hit but the album from which it surfaced was not critically acclaimed, and “Ice On Fire” became just another one of those ‘1980’s Elton John’ albums. A duet with George Michael, “Wrap Her Up”, became the next single to be lifted from the LP, and was also a reasonable success, although you might be hard pressed to remember what the next and final single, “Cry To Heaven”, actually sounds like, as Elton slowly struggled to hit the higher echelons of the charts.

Prior to the release of “Cry To Heaven”, Elton collaborated with a number of musicians on a single called “That’s What Friends Are For”. Credited to “Dionne And Friends”, it’s a quite charming piece of 80’s pop, with Elton hanging out with Dionne Warwick, Stevie Wonder and Gladys Knight. However, it is not on the most recent CD issue of “Ice On Fire” - indeed, nor is “Act Of War” anymore. The most recent repressing includes a few rarities from the period (“The Man Who Never Died”, a live version of “I’m Still Standing”) plus an ultra rarity in the form of a live recording of “Sorry Seems To Be The Hardest Word” from 1977. The plan was to include a 1984 live version of the song as featured on the “Nikita” 45, but this plan seems to have gone awry at some point, possibly by accident.

Note. “Nikita” was reissued, in various forms, in the early 80s and beyond. More details will appear in next month’s blog. 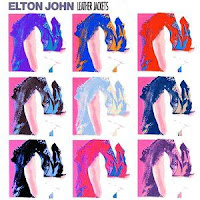 For all the hard work done with “Too Low For Zero”, it seemed as though Elton had lost his way by the time he released this album in 86. Not a big seller, it spawned singles that failed to do much chart wise, and Elton’s voice was in trouble - he would need to undergo throat surgery the following year. Some have claimed that, as it was due to be his last album for his North American label, he quite happily tossed out any old nonsense for this album.

Elton was out of his head on cocaine at the time, in the middle of a heterosexual marriage despite being gay, and twenty years after it was released, he admitted it was his least favourite album, helped in no small part by the fact that he was not in a good state of mind when he recorded it. Again, listen to it and like a lot of the other 80s albums, it will go in one ear, and out the other. But the singles do jump out at you, and whilst it is not a disaster, it’s not exactly “Pet Sounds”.

The situation isn’t helped by the photo of Elton and band inside decked out in leather gear - it’s either a camp attempt to look hard and butch, or it’s just bloody awful. And again, despite there being a number of rarities generated during this period (extended mixes, non album B-sides), “Leather Jackets” has never been reissued in expanded form. In fact, it hasn’t ever really been reissued at all, as it remains the only Elton CD to still only be available in “un-remastered form”, the current edition having been pressed back in the 1980s. The album was reissued in the USA in 1992, which included a slightly longer mix of “Heartache All Over The World”, but still no bonus tracks. 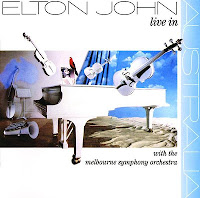 Whilst “Leather Jackets” seemed like the nadir of Elton’s career, then this 1987 live album seemed to turn Elton’s fortunes around. Although recorded on what was the final stages of a tour supporting “Leather Jackets”, it featured a set list that ploughed through bits and pieces of Elton’s back catalogue, including some more obscure material. Indeed, not one song from “Leather Jackets” made it onto the album.

It was part of a tour called the “Tour De Force”, where Elton played two sets. The first one, with full band, saw Elton decked out in elaborate stage gear, a throwback to the days of the 70s and early 80s, whilst the second half saw him in some sort of Beethoven style formal wear, complete with wig, backed by the Melbourne Symphony Orchestra.

Quite simply, the sound of Elton plus orchestra worked superbly, and the album, helped along by it’s choice of setlist, was inspired. It laid the ghost of “Leather Jackets” to rest, and helped set Elton up for his next comeback in 1988. A number of singles were lifted from the album, and although nothing rare appeared on them (all of the B-sides were simply live songs from the LP), the live version of “Candle In The Wind” became a big hit, and pushed Elton back into the public eye after the flop singles of 1986.