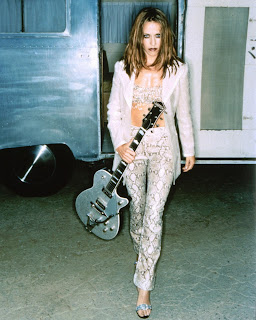 In recent years, the death of the physical single and the consistent desire by Radio 1 to disown any act with a lead singer over the age of 30 has meant that plenty of people who were hugely in the public eye some years ago, could now well find themselves being debated in a “where are they now?” style discussion.

You could say Sheryl Crow falls into that category. For several years, she was omnipresent, a fixture of UK radio and a big seller. But in the last decade, she has become more well known as once dating disgraced cyclist Lance Armstrong, than for her music. But Crow is still going, and this year marks the 20th anniversary of her debut LP, the critically acclaimed “Tuesday Night Music Club”.

Earlier this year, budget label Spectrum issued a best of called “Everyday Is A Winding Road”, the usual mix of hits and obscure stuff (including a soundtrack contribution called “Try Not To Remember”, only previously available on the equally obscure “Hits And Rarities“ set). This reminded me just how much I like her, and also how confusing her early years were, as A&M tried everything they could to get her singles into the charts. They did it eventually. So to celebrate both these events, here’s a quick look at Crow’s UK output.

Crow’s commercial breakthrough was rather long winded. She had, famously, paid her dues as a backing singer on Michael Jackson’s “Bad” tour in the late 80’s, before signing to A&M in the early 90’s. She recorded an entire album’s worth of material that was ultimately rejected by the label, and had to go back to scratch.

Crow then hooked up with a group of musicians to have another go, and the end result was 1993’s “Tuesday Night Music Club”. The musicians had worked together before Crow met them, and the title of the LP came from the fact that they met on a Tuesday to work on the record. Even though it was very much a collaborative effort, it was always intended to be a Crow solo LP, although there was much grumbling about song writing credits after the album came out, as the various collaborators began bickering with Crow about who wrote what.

It’s a great album, a real rootsy country rock LP, complimented superbly by Crow’s slightly croaky, blues-y vocals. In recent years, Crow has never really been considered as a particularly cool artist, (although she did start stripping off for the likes of “Maxim” in the late 90’s), but a quick listen to this album reminds you how good it really is.

Initially, neither the album nor it’s attendant singles did very well. The LP was issued in the summer of 1993, and “Run Baby Run” was selected to be the lead single in the UK, but did little chart wise. Neither did the follow up, “What I Can Do For You”. A second attempt at getting “Run Baby Run” into the charts was attempted in 1994, when the single was released again in a new sleeve with different bonus tracks, although one of the B-sides from the 1993 version, “Reach Around Jerk”, was included again second time around. This “re-use” of B-sides and live tracks would be repeated through the promo campaign for the LP, often so that, as Crow started to finally find success, some of these older rarities were exhumed to try and entice new converts into buying the latest single.

“Leaving Las Vegas” was issued as the fourth single overall, but sales were still sluggish. This release came backed with a variety of songs taped at a gig in Nashville, all previously unreleased in the UK. But it was the next release, “All I Wanna Do”, that turned Crow into a star. Issued in the fall of 1994, it seemed, compared to much of the album, a bit of a pop-esque throwaway, but it’s twanging guitar and upbeat summery vibe proved to be the winning combination, and it was a hit worldwide.

Thereafter, a sort of re-promotion of the record started in earnest. “Strong Enough” was issued as the next UK single, housed in a different cover to the US edition, and came backed with a mix of old B-sides and previously unissued live recordings. The US sleeve was used instead for the next UK single, “Can’t Cry Anymore”, which again gathered together various odds and sods for it’s extra tracks, with the first CD edition including single mixes of “All I Wanna Do” and “Strong Enough”, turning it into a sort of “Hits” EP, and came with a suitably adorned sticker.

With everything post-”All I Wanna Do” hitting the charts, A&M decided to try and get the flop singles in there as well, and so “Run Baby Run” promptly appeared, for the third time, as Crow’s latest single. All of the B-sides spread across the three formats came from the Nashville show. “What I Can Do For You” was then issued as the final single from the LP, with the first CD coming in a fancy box, and the B-sides a mix of old B-sides and new live recordings. Crow’s cover of Led Zepp’s (horrible) “D’Yer Maker” was issued on a single for the first time in the UK.

The album has appeared in a bewildering number of variant editions worldwide. Some copies feature nothing more than an image of Crow, her name and the album title on the front, most feature a “Sheryl Crow” logo spread out across big blocks overlaid over most of the front. Various “tour” editions that were released after the original LP had surfaced featured different tracks in different countries, with the 1995 UK reissue including a six track bonus EP taped at the Shepherds Bush Empire in London during June 1994. The album has most recently been the subject of a deluxe edition reissue, which includes a DVD of promo clips, and the odd unreleased track/remix, but no attempt was made to try and collate the various live recordings that surfaced both on the original reissues, nor the original singles. Most of the studio B-sides from the period, however, are present and correct.

Crow’s second album was a self titled affair, released in 1996. It carried on in the musical stylings of it’s predecessor, a mostly country-rock affair with some clever pop hooks throughout. With Crow now well established, finally, there was no messing about with recycling old B-sides, and much of the material that was spread out across the various editions of the multitude of singles issued were all previously unheard in the UK.

The original album was a 14 track affair, ending with a song called “Free Man”. When Crow toured the UK in the summer of 97, the album re-appeared in a new cover, subtitled the “Signature Tour Edition”. “Free Man” was missing from this edition, replaced by two new songs including an alternate take of “Hard To Make A Stand”, and a bonus CD, consisting of six live recordings from another Shepherds Bush show, this time from November 1996. Crow was joined, during at least one of the shows she played at the venue in that week, by then rumoured beau Eric Clapton.

The final single from the LP was “Home”, issued on an alarming three CD editions, the last of which included nothing more than the LP mix and the video on the CD-Rom section of the disc. It was then followed by a stand alone single, Crow’s Bond theme for the movie “Tomorrow Never Dies”, which sounded just like a Bond theme should do.

1998’s “The Globe Sessions” was as big a success, and as critically acclaimed, as the previous two albums, and was notable in that it included a song written by Bob Dylan, “Mississippi”, which he had taped for 1997’s “Time Out Of Mind”, then ditched, before offering it to Crow to record. Again, a tour in early 1999 saw a tour edition version of the album issued in the UK. Once more, the second disc was a six track live EP, this time from a Canadian show from 1998, whilst the main album now included, as a bonus, Crow’s cover of “Sweet Child O Mine”, also released as a stand alone single, and taped originally for the “Big Daddy” movie soundtrack.

Crow’s next studio album was 2002’s “C’mon C’mon”. The singles suggested there was no real reinventing of the wheel here, but there was a real summer vibe to lead 45 “Soak Up The Sun”, the video of which saw Crow cavorting around in a bikini. It was followed by a best of set, “The Very Best Of Sheryl Crow” in 2003, which again featured different variations of track listings in different territories. The UK one was re-released with a free five track bonus live DVD, whilst there was the usual “new songs” spread around the main album. A 2004 boxset edition included the main album (minus one of the new songs, “Let’s Get Free”), a DVD of music videos, and a repressing of the “Sheryl Crow & Friends - Live In Central Park” CD, originally issued in 1999.

Since then, Crow’s career seems to have remained quite low key. There has been at least one physical single release, “Good Is Good”, issued as the first single from 2005’s “Wildflower”, another album that first appeared as a double disc release, and 2008 saw the release of “Detours”, by which time the only physical singles appearing were for promo purposes only, or in overseas countries but not the UK. Crow’s last studio album was 2010’s “100 Miles From Memphis”.

As ever, some explanation. As regards the albums, the list below includes any double disc editions that were issued/reissued in the UK, in the absence of such things, the standard CD is shown.

The singles are, for the most part, everything on every format, as most of Crow’s singles - at the time of release - included something rare. Because some of the formats included b-sides later reused on subsequent singles, this meant some of the earlier 7” singles, previously of little interest because they had less songs, were now more interesting, because they were no longer missing anything “unusual”. So, the list below shows any 45 deemed to be of some interest, at least when bought in conjunction with other things on the list, but any utterly pointless single is omitted (such as the 7” of “Strong Enough”, which simply featured album tracks on both sides).

It’s no longer being updated, but you could also have a look at the “SC Info” website, which includes scans of the singles from overseas, where they were usually housed in different covers and sometimes with variant tracklistings (http://www.sherylcrow.org/index.htm). Nice.