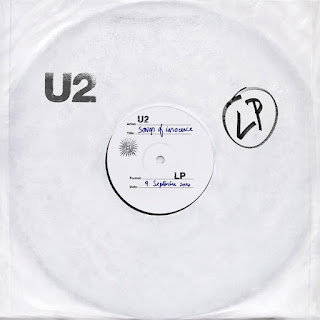 So, eventually, we come to what is, for now, my final U2 blog looking at the basic album and singles discography in the UK. A video one will hopefully be done in due course. This year sees the band preparing to commemorate the 30th anniversary of “The Joshua Tree”, and with the band’s physical single releases now reaching levels of non-exist-ency, this is as good a time as any to bring the story up to date.

There isn’t really too much to say about this period of the band’s career. Musically, the band didn’t reinvent the wheel, instead creating albums that seemed to mine parts of their back catalogue, sometimes experimental, sometimes back to the days of “widescreen rock”, but often with pretty good results. The group found it increasingly difficult to continue to get radio play in the UK though, as the likes of Radio 1 began to slowly push the band off towards the sidelines as the Noughties progressed, and whenever people did talk about them, it was usually with an element of disdain - the continued perception that Bono was convinced he was some sort of god, the “iTunes Incident” generated by the freebie release of “Songs Of Innocence”, the ambivalence towards 2009’s actually really wonderful “No Line On The Horizon” - as REM threw in the towel and got praised for doing so, U2 continued to exist, allowing people to continue to moan about them. But just look at some of the songs from this period, and you will realise that we should be pleased that this band are still going - “Magnificent”, “City Of Blinding Lights”, “Elevation” and “Yahweh” to name but four. And of course, they have the advantage of not being Calvin Harris.

2000’s “All That You Can’t Leave Behind” was trailed by the epic “Beautiful Day” single, and was supported by a mega tour, in which the band began to shoehorn more oldies into the set. It spawned multiple singles, all of which were subjected to much multi formatting, with later releases appearing as DVD singles which at the time, was the new format on the block. The release of “Elevation”, itself with an Angelina Jolie starring promo thanks to it’s “Tomb Raider” link, included a non-chart eligible remix 12”, which featured mixes of both this track and “Beautiful Day”, and was presented as a double A-side release of sorts.

The album came after the band had contributed a new song, “The Ground Beneath Her Feet”, to the soundtrack of “The Million Dollar Hotel”, and selected formats of the album included it as a bonus - some UK CD editions listed the track but actually failed to include it on the actual disc itself. The live B-sides on the CD2 edition of “Beautiful Day” were lifted from the band’s “Popmart: Live From Mexico City” VHS, which as alluded to in my last U2 blog, was also released in alternate form as a fan club only CD, “Hasta La Vista Baby”, at round about the same time as this single. “Walk On” was released as the final UK single in the fall of 2001, long after the band had toured the UK, but it had actually been issued in Canada (in the same basic sleeve design) some nine months previously.

The band’s follow up hits album to the “1980-1990” release followed in 2002, the obviously titled “The Best Of 1990-2000”. This time around, the single used to promote the set was a brand new track, “Electrical Storm”, but just like it’s predecessor, the album was issued as a limited edition release with a second disc of B-sides. However, this one wasn’t quite as exciting, as we were now very much in the era of CD Singles, and as such, for every B-side that made the set, two or three others didn’t. So, this wasn’t as good a box ticking exercise as the bonus disc on “80-90” had been. Some copies came with a free DVD, but this was also given away with initial copies of the accompanying “Best Of” DVD that was released at the tail end of 2002.

“Electrical Storm” was subjected to a single mix by William Orbit, which was included on the main album, whilst the ‘original’ version, issued as the lead track on the CD2 edition of the single, was also included on the “B-Sides” disc of the album. A number of tracks were remixed for this new best of, similar to the situation where some of the tracks on the B-sides disc in the “1980-1990” set had been subjected to some editing. The DVD release of the single featured an “Interview With Larry” - the band’s drummer has often been elevated to the status of erstwhile front man, as it was he - and nobody else in the group - who was featured on the cover of “Songs Of Innocence”.

2004’s “How To Dismantle An Atomic Bomb” was also launched with a ‘big’ power pop single, in the form of “Vertigo” - quite an energetic piece of noise, but arguably just a little bit formulaic, and probably outshone by some of the later singles, such as the melancholic “Sometimes You Can’t Make It On Your Own” or the bouncy throb of “All Because Of You”. Nevertheless, it was for a while - and for some, probably still is - one of the band’s calling cards. During their summer stadium shows in 2005, the band even used to play it twice, to both open and close their set.

Once more, singles from the album were subjected to much multi formatting, with pretty much everything released containing something exclusive. A multitude of remixes were made of “Vertigo”, which resulted in both a non chart eligible 12” being issued when the single was first in the charts, and another one being released alongside the release of “Sometimes”. The band’s “secret” gig that they performed by the Brooklyn Bridge in New York in late 2004 was documented via some of these singles, with a video of the performance of “City Of Blinding Lights” making it onto a DVD single, and “She’s A Mystery To Me” surfacing as a B-side.

Given that the band’s two previous best of sets were quite high profile, it makes it all rather odd that a new compilation, offering bits of the first release, and bits of the second, was released. But it looks as though the release was done to try and include material from the last two studio albums, and the release of “18 Singles” also coincided with the release of a career spanning hardback book by the band. All 18 songs were singles, as the two new songs, “The Saints Are Coming” (with Green Day) and “Window In The Skies” were issued as singles either side of the album’s release.

Selected formats of the latter featured the band’s cover of Leonard Cohen’s “Tower Of Song”, which featured the great man himself, and the DVD edition featured the video of the track - the recording dated back to a 2005 documentary on Cohen called “I‘m Your Man“. Like most of the albums from this period, a limited edition version of the LP was released, which included a short live DVD from the recent “Vertigo” tour - the performance was from a different show than that included on the full length “Vertigo Live” DVD that had been issued the previous year.

2009’s “ No Line On The Horizon” had a mixed reception from the critics, and indeed, seems to be an album which could be seen as being released in the middle of the band’s wilderness years. The album took ages to complete, with the very earliest work being conducted back in 2006 before the release of the “18 Singles” album. Lead single “Get On Your Boots” was seen as a poor choice of lead 45, and the band’s hopes of playing Glastonbury the following summer were dented after Bono suffered a spinal injury early that year. The band accepted an invite to appear the following year, where the band filled the set with material from “Achtung Baby” to celebrate it’s 20-year anniversary.

As for “No Line”, sales dipped off quickly, and the single releases from the album struggled. Band members later lined up to criticize the album, but despite this, the first time I heard it, I loved it. Even though it did get some good reviews when it was first released, the underwhelming performance of the record has seen it get buried in the list of “poor albums by once great artists”, which is unfair - perhaps it will get re-evaluated in twenty years.

With the physical single now becoming a lost art, there was little in the way of multi formatting when it came to the three single releases from the LP. The first two singles appeared as 2-track CD’s and 2-track 7” singles, both with the same B-sides. Final single, “I’ll Go Crazy If I Don’t Go Crazy Tonight”, opted for a different approach, with the 7” including a remix of the A-side, and the CD Single offering a live recording of previous 45 “Magnificent”. With the exception of a freebie 7” included in a DVD boxset release, these singles represented the final physical releases on the format for the band in the UK (at the time of typing). 2014’s “Songs Of Innocence” was of course hyped via it’s “free to all iTunes users” publicity trick, and promo for the album beyond this was via a series of radio only singles and TV performances of said singles. To try and encourage people to buy the physical product, the double-CD and white vinyl editions featured material exclusive to those formats.

Whenever I go onto the Super Deluxe Edition website, there are often quite vicious comments about the price of so-and-so’s new “special edition” of their album, with a complete refusal to buy said release until the price drops. So, I am not the only one who can sometimes only stretch their cash so far. So, I have decided to list below what are the standard (ish) versions of each U2 album from the period, along with the vinyl edition (to cater for the hipsters, of which, sometimes, I am actually one) and, for the post-2001 albums, the deluxe edition. Of course, the deluxe editions all feature exclusive material, so if money is no object, then they are the ones to go for.

With the singles, U2 made a point of including exclusive material across virtually every format on every release, so listed below are pretty much every single released by the band in the UK during this period. Anything missing is likely to just be the odd cassette single, which would have included less material than it’s CD counterpart anyway, hence it’s absence (I think only the tape issue of “Beautiful Day“ is excluded below, from memory). It is worth pointing out that multiple remixing of latter period singles from the “No Line” album were conducted for the US market, so anybody unimpressed by the track listing of the “Magnificent” or “I’ll Go Crazy” singles may wish to hunt down the lengthier, multi mix, maxi singles that appeared in the US either as promo or commercial releases.