So, how many people watching “The Culture Show” are aware that Lauren Laverne was once the vocalist in a band named after a character from Grease? For a few brief years in the 1990’s, Kenickie were a bright shining light in the sometimes dull world of Indie Rock, and released several magnificent singles that, heartbreakingly, are pretty much unknown to the current generation of NME readers. I was obsessed with this band, making my one and only visit to the Reading Festival in 1997, primarily to see them. When we arrived, me and my friend were asked at the gate who we were there to see. “Metallica” my friend said, “Kenickie” I said. Kenickie were one of the few bands where you didn’t just want to marry the lead singer, but the second guitarist and bassist as well. They married Phil Spector-esque harmonies with spiky riffs, and as a result, succeeded in releasing possibly the greatest single of 1996, “Millionaire Sweeper”. It’s been a decade since their demise, and I’m not sure anybody has come close to making guitar-pop records as brilliant and beautiful as they did. In this blog, we look at the short history of this near-forgotten great band. 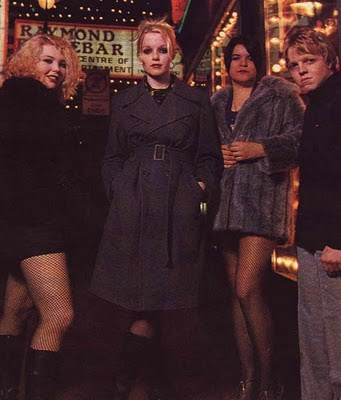 Like so many bands pre-MySpace, Kenickie made their single debut via a limited edition 7” in 1994/95, an EP called “Catsuit City”. Issued on the local (to the band) Slampt label, the single featured no less than EIGHT tracks - proof of how you could make your point in a song in less than 2 minutes if you tried hard enough. Now a £40+ rated collectible, it’s desirability is increased by the fact that none of the songs have been released again since, although some tracks were re-recorded as B-sides for latter period singles.

The band then released a single on the none-more-indie Fierce Panda label, often a starting point for a new guitar band. “How I Was Made“/“Come Out 2Nite” was a thrilling, punky, poppy roar, both tracks being good enough to be included on their debut album two years later. The CD Single version featured extra tracks, and was dubbed the “Skillex” EP. By the following year, 1996, the band had signed to one of the numerous EMI offshoot labels, EMI Disc (run by members of Saint Etienne), and released two singles that year, both of which would also appear on the debut album. “Punka” was a mickey taking dig at the Indie scene, and the bands who were determined to make unlistenable records that sold no copies - “lo-fi songs are great“ Laverne scowled, with some Glitter Band style yelps from sometime vocalist Marie Du Santiago. Follow up song “Millionaire Sweeper” meanwhile, sounded like a sort of slowed down slightly more-miserable Ronettes, with some fabulous ‘yeah yeah yeah’ style backing vocals. Both singles were issued on three formats, but the only format which contained exclusive material in each case was the CD Single, the 7” and Cassette featuring only one of the three new B-sides that the band had recorded for each 45.

In 1997, in what seemed like a blatant attempt to hit the higher echelons of the charts, “In Your Car” was released on two CD’s, each with different B-sides and in different sleeves. The trick worked, and the single charted inside the top 30, as did a similarly promoted follow-up single “Nightlife”. The single release of the latter coincided with a Radio 1 taped show at the Highbury Garage in North London the same day, 28th April. The band’s debut LP, “At The Club”, was released two weeks later in May 1997, promoted in part by an in-store gig at the now defunct Tower Records at Piccadilly Circus on the day of it‘s release. If I remember correctly, drummer Johnny X failed to turn up, and with a friend standing in for him, only the three girls were available to sign copies of the album after the show. Hitting the top 10 album charts, the album featured a sizeable number of songs already released on earlier singles, and by striking a perfect balance between spiky punk and pure pop, “At The Club” remains a great lost Britpop classic. Following it’s release, “Punka” was re-released, and if I remember correctly, was done so against the band’s wishes. Both “Punka” and “Nightlife” were also issued as 7” picture discs, although unusually, they were not housed in see through sleeves so you could see the images pressed onto the vinyl, but came in normal picture sleeves. 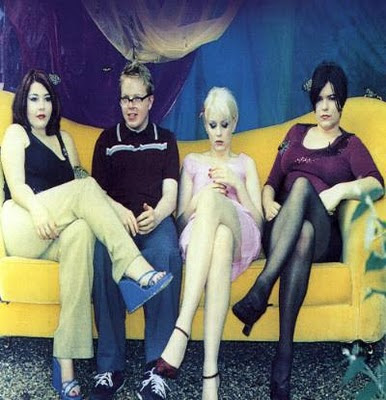 Following a mini Greatest Hits set at Reading, where I seem to recall the band attempted a medley of virtually every B-side they had recorded to a slightly bemused crowd, the band returned to the studio to record material for 1998’s “Get In”. Two singles were issued in the run up to the album’s release, “I Would Fix You” and “Stay In The Sun”, which showed a slightly more ‘pop’ direction. Both singles were issued on two CD’s, and as coloured vinyl 7” singles housed in semi-wraparound sleeves, so the vinyl was partly on show when displayed in record shops.

No sooner had “Get In” been released, than the band seemed to implode. The band ended with a famously near-shambolic gig at the London Astoria 2, with Laverne pretty much announcing the band’s split from the stage. Kenickie were no more. In 2000, a posthumous send off in the form of a mini album consisting of all eight tracks the band had taped for John Peel’s Radio 1 show (two sessions of four songs each) was released, bringing down the final curtain.

Since the split, the two vocal halves of the band then set off on new careers. Marie, along with bassist Emmy-Kate Montrose, formed a new band called Rosita, who released the “Live It Down”/”If You’ve Heard” 7” in 1999 followed by the 3 track “Santa Poca’s Dream” EP. An album was in the pipeline - the band previewed at least one new track at a Radio 1 taped gig in Liverpool at the tail end of 1999, “This Is Tonight”, and another song “Sugar” appeared on a Fierce Panda EP just after the debut 7” . However, Rosita split soon after, although Du Santiago is still involved in music, as part of The Cornshed Sisters, and Montrose has guested with various bands since. Johnny X has also had several musical outings since the band folded.

Laverne has had the most high profile career post-Kenickie. She started to branch off into TV presenting, and at the same time as she presented Channel 4 music show “Planet Pop”, she was asked to provide vocals to the Mint Royale single, “Don’t Falter”, which became a huge hit. Laverne performed the song on stage with the band on at least one occasion. This was followed by a solo EP, and another new song was included on the “Born To Do It Better” music mag freebie CD in 2000, but thereafter, Laverne shied away from making music. She was, for a while, leader of the “Johnny Vaughan Tonight” houseband on his BBC Three chat show, but has now carved out a career as a music TV show presenter, as opposed to being an actual musician. 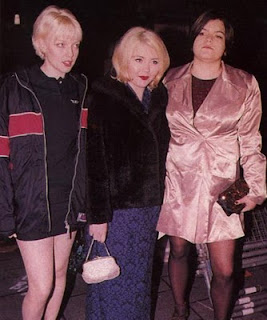 Listed below are what I would consider the “essential” items in the Kenickie back catalogue. Any singles that are issued in otherwise available picture sleeves, with B-sides on other releases, that are not on coloured vinyl, are not listed. Similarly, the band's debut album was also issued on vinyl and cassette, but with one less track. "At The Club" was also issued in the US, with an altered track listing.

The Peel Sessions mini album has a running time of less than half an hour - it is a shame that no attempt was made by Strange Fruit to include other radio sessions, as the band taped other tracks for the BBC (including songs that never made it onto a Kenickie LP). The only such track that HAS made it from the BBC vaults onto a Kenickie 45 or LP was "Killing Fantasy", taped for the Evening Session in 1996, and only ever released as the B-side to "In Your Car". If an original studio version exists, it has never been released.

It’s worth pointing out that the band also gave away rarities for inclusion on several compilation records, and I would suggest you have a look at the band’s Wikipedia page for details of these recordings. It seems that a demo of a track called "Walrus" actually pre-dates the "Catsuit City" EP, making it their first ever release, and can be found on the "Signal Vs Noise" compilation.

Some of the rarer items from the band's early days were later re-recorded with "new" titles, but most of these can easily be spotted in the list below. Some of the tracks listed below as B-sides were recorded specifically for compilations released at the same time - "I'm An Agent" was actually taped for a Gary Numan tribute LP, having appeared on one of his early solo albums - whilst several promo 12"'s are in existence which feature remixes never commercially released, although such items are restricted to the more "pop" singles from "Get In".

I can wholeheartedly recommend everything you see in this list below.