If the Stones’ 1960s output had been issued in a slightly haphazard way (totally different US albums to their UK counterparts), this was pretty much stamped out at the start of the next decade. The Seventies also saw the Stones start their own label, the imaginatively titled Rolling Stones Records. It did, however, feature the most iconic logo design in rock and roll history.

In this blog, we shall look at the band’s releases on this label from 71 to 86 - 1986 may seem like a slightly random cut off point, but this was the year that the band almost split up (the next releases from Jagger and Richards were both solo albums, following a huge falling out), but it was also the point at which various “events” occurred - the next album, 1989’s “Steel Wheels” was a major return to form, and the band’s singles started to appear on CD for the first time. The band’s 1989-2010 years will be covered in a future blog. 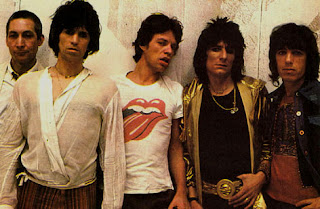 For such an established band, it seems slightly strange that the band’s albums from the period have never really been given much of an overhaul. Yes, there have been more reissues of these albums than you can shake a stick at, but with only one exception, there has been a complete absence of bonus tracks on all subsequent releases. Some interesting editions of the band’s LP’s from this period do exist.

1971’s “Sticky Fingers” was originally issued in a Warhol designed sleeve, a famous image of a close upshot of a pair of jeans, zoomed into the male crotch area, complete with working zip. The album has been issued both with or without working zip over the years, the latest pressings are “zip-less”. 1972’s “Exile On Main Street” was given a, erm, 38th Anniversary issue in 2010 - with ten previously unissued tracks/mixes on a second CD. A ridiculously priced deluxe box set was also pressed, with extra vinyl and DVD discs, but didn’t actually feature any material that couldn’t be gotten hold of on any other “cheaper” release. The most interesting version was actually the 2-CD edition sold via HMV, which came in a unique black slipcase with the band name and album title printed on the cover, and nothing else.

1976’s “Black And Blue”, home to the genius that was “Fool To Cry”, was originally issued in two different covers. The LP came in a gatefold sleeve, which featured a photo of the band spread out across the front and back covers, but this picture was deemed too awkward to use for the Cassette edition, so that version came in a black cover with the band name and album title printed at the top. More recent Cassette pressings reverted to the original LP cover photo. 1978’s “Some Girls”, the moment where the Stones went Punk, has been issued in a bewildering number of variant sleeves over the years, helped along after initial copies were withdrawn when the images of famous celebrities on the front were seemingly used without consent.

1986’s “Dirty Work”, generally regarded as the band’s nadir, nevertheless came in an unusual Vinyl edition - copies were housed in a strange semi see through red plastic outer cover, which I am sure had some significance, although god knows what that was. I seem to recall that in some countries, coloured vinyl editions of all of the band’s studio albums from this period were repressed, but that could just be my imagination.

The Live Albums / The Compilations

Whilst in recent years, the band seem to have issued a live album from every tour they conduct, they were a bit more “selective” up until 86. Often overlooked is that even though the live album might be seen as a bit of a cop out, the Stones actually played covers on stage and then offered some of these up on these LP’s - and these songs never resurfaced, in studio form, on any subsequent record. 1977’s double album, “Love You Live”, therefore featured two “new” songs - “Mannish Boy” and “Crackin’ Up”, whilst 1981’s much maligned “Still Life” spawned “Going To A Go Go” and “Twenty Flight Rock”. The latter LP was issued as a picture disc LP on it’s original release, and both albums - like their studio cousins - have been reissued on CD on at least two occasions.

Whilst Decca (and others) spent the 70’s repackaging the band’s hits across a variety of compilation records, the band also put out their own, dealing exclusively with material from the Rolling Stones Records label. The first of these, 1975’s “Made In The Shade”, was supposed to be a greatest hits - but as the band hadn’t issued many singles on their own label by this point (they were averaging one and a bit per album), it didn’t actually have many hits, and was thus padded out with album tracks like “Dance Little Sister” and “Bitch”.

In 1979, they released the even more baffling “Time Waits For No One”, a seemingly random pick of tracks from “Sticky Fingers” up to, but not including, “Some Girls” - but was of course issued after “Some Girls”. The reason? The earlier albums had been distributed by Atlantic, but “Some Girls” was handled by EMI, and thus this was really a collection of the Atlantic years. “Bitch” made it’s second appearance on a compilation album, and there was even a pair of live tracks off “Love You Live”.

In 1984, a somewhat more comprehensive collection was issued - “Rewind” covered the period from 71 to 84, and included most of the big hits plus a few album tracks. An accompanying Video, “Video Rewind”, came in a different cover and included a mix of official promos and live clips. The track listing, unsurprisingly, was completely different.

There was a fourth compilation - “Sucking In The Seventies” had appeared in 1981, a sort of odds and sods set, which included a previously unissued live version of “When The Whip Comes Down”, a new song called “If I Was A Dancer”, and a US only B-side, “Everything Is Turning To Gold”, which had appeared on the flip of “Shattered”. Although the album's "official" cover was a black and white image, I believe some US pressings over the years came shrinkwrapped with a big tongue logo sticker covering the front (possibly only from the CD era), whilst this (and other) Stones albums were reissued in Argentina to coincide with the band's tour there in 2006, and was housed in a numbered tongue logo slipcase, with the Argentinian flag emblazoned on the tongue itself. In recent years, there was a concerted effort to put together a Greatest Hits which included the material from the Sixties, Seventies and beyond - details of the “Forty Licks” set will appear in a forthcoming blog.

The Singles / The Rarities 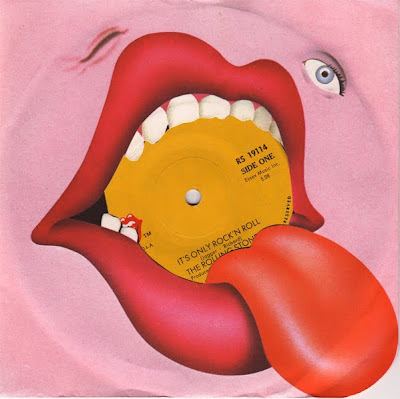 Having issued a single every few months during the 60’s, the Stones relaxed this policy once on their own label. Furthermore, for a band who issued an enormous amount of exclusive songs on the A or B side of their latest 45 during that decade, they stopped doing B-sides for most of the Seventies and Eighties.

At first, the band’s singles in the UK came housed in superb “tongue logo” die cut sleeves - although a copy of “Angie” in one won’t sell for much more than one in a bog standard plain bag, they are such fantastic pieces of art, I would suggest you DON’T buy a Stones single from 71-76 unless it comes with it’s tongue sleeve. The exception is 1971’s “Brown Sugar”, which was initially released in a picture sleeve which featured each member of the band holding a strategically placed vinyl copy of “Sticky Fingers”. “Brown Sugar” was one of the few Stones singles from the period to feature a ’new’ song on the B-side, as a live version of “Let It Rock”, taped in Leeds in 1971 (at the same venue where The Who taped “Live At Leeds”), appeared on the B-side along with the aforementioned album track “Bitch”. In the US, “Let It Rock” was not included on the single. “Wild Horses” was also issued as a US 45, but not in the UK - a practice repeated by the band many more times before 1986.

It wasn't until 1974 that the next B-side surfaced, when “It’s Only Rock And Roll” came backed with “Through The Lonely Nights”. By 1978, the 12” single was king, and the disco-fied “Miss You” appeared on this format, pressed on Pink Vinyl - it was also the start of the period whereby every subsequent 45 would come in a picture sleeve. The 12” also featured an extended mix of the track, and played at 33 instead of 45rpm. A normal, black vinyl 7” was also issued, with the album track on the A-side. Another song from “Some Girls”, “Far Away Eyes”, was released on the B-side of both formats.

For some reason, the band did not take to issuing 12” singles as a regular thing, and every single they would release from now until 1982 would appear on 7” only. The last such release that appeared on 7” only before their next 12” was a live version of “Time Is On My Side”, from “Still Life”, in September that year, but 1984’s “She Was Hot” was also issued on 7” only, which included a previously unissued B-side, “I Think I’m Going Mad”.

“Undercover of the Night”, like “Miss You”, was issued on both 7” and 12” in 1983. The 7” was aimed at the casual fan, with nothing rare on either side of the disc, but the 12” had remixes of both “Undercover…” and “Feel On Baby”. The next 12” was not released until 1986, the band’s cover of “Harlem Shuffle”, which featured new remixes on either side. Again, a 7” with album mixes of album tracks was also pressed. The follow up, “One Hit To The Body”, was both edited and extended for single release - in the UK, these mixes were housed on the 7” and 12” respectively, but a hyper rare Mexican 12” on red vinyl exists which has both mixes.

Although it is slightly outside our remit here, in 2005, the “Rarities 1971-2003” set was released with the aim of including some of this material. It included the live version of “Beast Of Burden” which had been included on the “Going To A Go Go” 7”, “If I Was A Dancer”, “Through The Lonely Nights”, and that live take of “Let It Rock”. Also included were the extended mix of “Miss You”, “Mannish Boy” from “Love You Live”, and one of the two “Harlem Shuffle” remixes, but all three tracks were edited for this release.

Listed below are all of the Rolling Stones releases on their own label from 1971 to 1986 which I would suggest you track down. I have decided, for the albums, to list the original vinyl pressings only, although other notable pressings in different covers or with extra tracks are also included. For the singles, I have listed 12” singles where they exist - if not, then the 7” is shown. Any 7” singles which exist but are not listed offer nothing exclusive - hence their non-inclusion. We shall conclude our look at the Stones, from 86 to the present day, in a future blog.

Further reading:
45cat.com, with images of Stones 7" singles from this period: http://www.45cat.com/artist/the-rolling-stones
Discoogle.com Discography - scans of all the studio LP covers and more: http://www.discoogle.com/wiki/Rolling_Stones_Discography#Single_7.22_.28Vinyl.29
Posted by jason45104@fsmail.net at 14:26