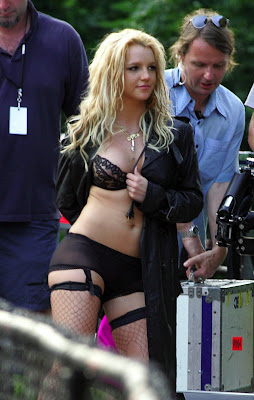 Last month, we looked at Britney’s UK singles, and selected collectable albums from around the world. This month, we look at the format that you would have thought would have suited her down to the ground - VHS and DVD.

For some reason, unlike Girls Aloud, Britney’s “Video” releases are a bit hit and miss. Whilst the UK Pop Starlets have released all of their video clips across a series of DVD releases, and have issued live concert DVDs for all but one of their tours, Britney hasn’t quite managed all of this. Could it be that Britney is rumoured to rely a bit too much on backing tapes on stage, meaning a live DVD isn’t very live? Maybe. But at least two DVD’s have been released from concert performances, so maybe not. In this blog, we look at Britney on DVD - and see what was released and when. 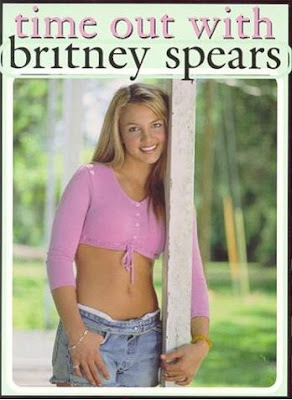 Britney’s first VHS release dates from 1999, entitled “Time Out With Britney Spears”. The set has since been re-released on DVD. It’s more of a “fan” collection, rather than a compilation tape, as it features all of Britney’s five singles released from that first LP - but not all of them in their original video clip format! Instead, you get bits and pieces of interview and behind the scenes footage, and live versions of “Born To Make You Happy” and “From The Bottom Of My Broken Heart”, but you do get the original clips of “Baby One More Time”, ”Sometimes” and “You Drive Me Crazy”. Quite why the videos for the other two songs are missing, I really don’t know.

When originally released, various freebies were given away with the VHS edition in different countries. Arguably the best version is that released in Japan, which included a free 3 track 3” CD Single, with the “Jazzy Jim Hip Hop” and “Pimp Juice” mixes of “Crazy” along with the “Sometimes” b-side “I’m So Curious”.

Next up is 2000’s “Live And More”, which as the title suggests is a mix of live material, and other odds and sods. The bulk of the live footage is from a Waikiki Beach gig in 2000, although there also a couple of songs from her “Saturday Night Live” TV appearance in the US the same year - along with the comedy sketches she appeared in on the same show. There are also three music videos, for the first three singles from her second LP, “Oops!…I Did It Again”. The tracks in question are “Oops”, “Lucky” and “Stronger”.

Soon after the release of her third LP, “Britney”, in 2001, a DVD using the same cover but with the title “Britney - The Videos” was released. Despite it’s title, it mostly consisted of live performances and more behind-the-scenes stuff, with only two actual video clips on the UK edition - “Don’t Let Me Be The Last To Know” (single number 4 from the second LP), and “I’m A Slave 4 U”, the lead single from the “Britney” LP. US editions of the DVD also included the clip for “I’m Not A Girl Not Yet A Woman”, but the UK edition used a live take of this song instead of the promo video. 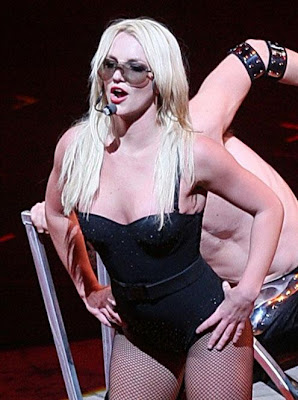 2002 saw the release of “Live From Las Vegas”, a live DVD from - yep - Las Vegas. Like the Waikiki Beach gig, this was originally filmed for a TV broadcast, but unlike that set of footage, this is a full length concert DVD. The videos for “Slave”, “I’m Not A Girl” and “Overprotected” appear as bonus tracks. The music video for “Boys” was included as a bonus feature on the “Goldmember” DVD, but the video for the other single from the “Britney” album, “I Love Rock N Roll”, remained commercially unreleased at this point.

As with “Britney”, her next album also provided the title for her next DVD - “In The Zone”. Again, the DVD was a mix of interview footage and TV gigs, along with the music videos for “Me Against The Music” and “Toxic”. A free 4 track CD single was included in the pack, although unlike the Japanese “Time Out” 3” CD, this one did not come in it’s own sleeve. UK and US editions featured different tracks - the UK one included two new songs called “I’ve Just Begun” and “Girls And Boys”, the latter an unquestionable Britney classic, which doesn’t really deserve to be slightly lost on a freebie release. As mentioned last month, a French Box Set includes this DVD (and it’s free single) packaged with the “In The Zone” album.

If you had to pick ONE definitive Britney DVD, then it’s her “Greatest Hits” collection from 2004. This one really does the business. It includes all of Britney’s video clips from “Baby” right through to “Everytime”, plus what was at the time her new single, “My Prerogative” and a video for the remix of “Overprotected” as well. Also included was footage filmed on the set of the shoot for “Outrageous” (the picture at the top of this blog is from said shoot), which was being planned for release as a single from “In The Zone”. However, Britney was injured during the shoot, and the music industry being what it is, the decision was taken to cancel the rest of the shoot, as her schedule could not cope with any "delay" in promotional duties, although the song was still issued as a single in some countries.

2005 saw the release of “Chaotic”- not really a music DVD, but a compilation of the five TV shows of the same name that were broadcast during the summer of that year starring Britney and her fiancee, then husband, Kevin Federline. The footage was shot during 2004, whilst Britney was touring, so there is quite a bit of music scattered throughout each episode. The real selling point is the free CD that comes with the DVD, with four new songs, plus a remix of one of these songs, “Someday”. Again, there are some moments of pure pop genius on this freebie, especially “Over To You Now”, which really should have found a home on a “proper” Britney LP. Also included on the DVD are the clips of “Someday” and “Do Somethin’”, the latter being the second single to be taken from the “Greatest Hits” LP.

The next proper Britney DVD was also mentioned last month - the double disc “Singles Collection” release from 2009. This edition came with a free 16 track DVD, which mostly duplicated clips from “Greatest Hits”, but did include some clips released after that set had been issued. There were six “new” clips in total - “Gimme More”, “Piece Of Me”, “Womanizer”, “Circus”, “If U Seek Amy” and “Radar”. The clips for “Break The Ice” and then current promo single “3” failed to make the cut, and to this date, remain officially unreleased on DVD. 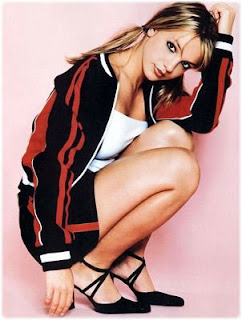 Go into Poundland, time it right, and you will probably find one of those “Unauthorised and Uncensored” DVD’s about Brit - I certainly have one from 1999 on VHS called “The Britney Spears Story”, and there are probably hundreds of these things “containing no Britney music” in existence. There have been a pair of official “documentary” DVD’s released with Britney’s authorisation. The first of these, “Stages”, was only included as a freebie inside a US hardback book, so info is scant. The second, and the one which has been released in the UK, is 2008’s “On The Record”, filmed during the promo campaign leading up to the release of the “Circus” LP later that year.

Last month, I mentioned a split Britney/N Sync CD that was sold through US McDonalds chains - well, there’s a VHS as well. “Your #1 Video Requests And More” includes 2 clips by each act, plus a “making of” video. The Britney clips are for “Oops” and “Born To Make You Happy”, which was the first time it had been made officially available in the States when this VHS was released.

Also mentioned last month were selected "rare" editions of Britney albums and singles where video footage was included on free DVD's, or the CD-Rom section of the disc. It's also worth pointing out that several Britney promos appear as bonus features on the DVD release of "Crossroads", Britney's first (and to date, only) major motion picture.
What next? Well, 2011 should bring a new album, and if the latest shower of nonsense on the X Factor finals is anything to go by, we desperately need a proper pop star to come back to the scene to save us from the horror of One Direction and their ilk. Britney - your world needs you!
Further reading and viewing:
Britney's Official UK Site: http://www.britney.com/uk/home
"Break The Ice" promo: http://www.youtube.com/watch?v=mVdxIjjxVzw&feature=related
"3" promo: http://www.youtube.com/watch?v=QubWKLQUrN0
Posted by jason45104@fsmail.net at 10:20