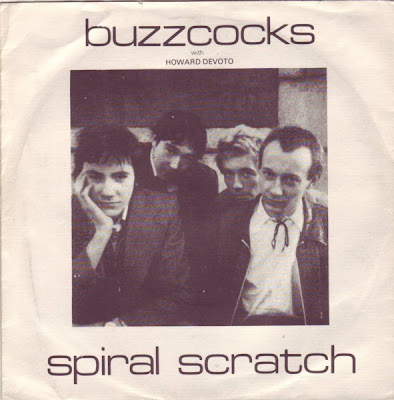 When I started this site, it was inspired by what was - I felt at the time - a record industry happily fleecing the fans, via the medium of multi formatted singles and endless reissues of albums I already owned. With the single now more or less destroyed by the soulless nature of the digital download, I am starting to soften up a bit more - I recently happily re-bought the debut Charlatans LP due to it’s new cover and extra unreleased material.

To some extent, many of the articles I written have kept to my original ambition, as I have zeroed in on artists who have released the odd career spanning box set over the years - the idea is still, at times, to make mention of these, as these releases could often be the quickest and cheapest way to get a lot of releases in one go. As far as Buzzcocks releases from the EMI days go, it was possible until a couple of years ago to get everything the band had released during their first lineup(s) by buying just TWO box sets. Quite impressive, I think. In this article, I shall detail what these two releases were, and how the history of the band had evolved in the run up to these releases. 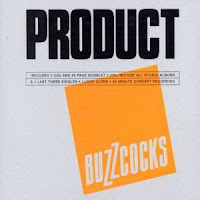 Buzzcocks had formed in 1976, and went through several line up changes before their first record. Led by Howard Devoto, with Pete Shelley on Guitar, their first release featured Steve Diggle on bass and John Maher on drums - the nucleus of the classic line up now in place. After a now famous support slot in their native Manchester with the Sex Pistols, the band released their debut EP in early 77, “Spiral Scratch”, on their own New Hormones label, one of the earliest independent releases (and for younger readers, this is where the term “Indie” really comes from!)

The EP soon sold out, as word of mouth began to generate interest around the band, and sizeable numbers of repressings took place in order to meet demand. Although this line up of the band went into the studio to begin work on an LP, Devoto left midway through, having become bored of the punk scene, and after more lineup changes, it was a revamped line up of Shelley on Vocals, Diggle on Guitar, Maher and new bassist Steve Garvey that eventually recorded the official debut LP, 1978’s “Another Music In Adifferent Kitchen”.

The band’s first major label 45, the incendiary “Orgasm Addict”, surfaced in late 77, recorded by an interim line up featuring Garth Smith instead of Steve Garvey. By August 79, the band had released seven more singles on the United Artists label, and a second LP, the classic “Love Bites”, released in September 1978 and regarded by many as the band’s finest album. A best-of set, “Singles Going Steady”, was released thereafter, which included both sides of the eight UA 45’s, with the A-sides on side 1, and the B-sides on side 2. Even today, it is still thought of as one of the finest “Greatest Hits” albums released by anybody, consisting as it does of a number of truly classic pop punk masterpieces where the quality never wanes.

1979 saw the release of the third LP, “A Different Kind Of Tension”, promoted by the “You Say You Don’t Love Me” 45. Although nobody quite knew it at the time, the band were on a slow downward spiral, epitomised in part by the album failing to dent the top 40. In 1980, the band released the first of three stand alone 45’s, known as “Part One”. In theory, a double A side single featuring two new songs, the consensus with AA side releases was that one side always got more exposure than the other, so the band opted against listing one song as an a-side, and the other as the double-A, but instead identified each side of the single by the use of symbols such as stars or plus-signs. Two more stand alone 45’s were issued the same year, under the titles of “Part Two” and “Part Three”. 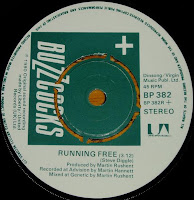 In 1981, plans for a fourth album were abandoned, and even plans for a “Part Four” single were scrapped as the band ground to a halt. One of the songs from the “Part Four” session, “I Look Alone”, crept out instead on the Various Artists “C81” Cassette compilation. Buzzcocks were no more.

In 1989, EMI issued “Product”, a five-LP box set. The accompanying sleeve notes referred to the band in the past tense, but the band had reformed by the end of the year. The box set included, in their original sleeve, the three studio albums and the “Singles Going Steady” set. A bonus “incentive purchase” album, “Many Parts”, was included, which consisted of the Parts One to Three singles, “I Look Alone”, and eight previously unissued live recordings.

The CD edition squeezed all of this material onto just 3 discs. CD1 included the first two LP’s, CD2 included “A Different Kind Of Tension” and most of “Singles Going Steady”. Of the 16 tracks on “SGS”, four had appeared on earlier Buzzcocks studio LP’s, and so as there was only space on the remainder of the disc for the 12 remaining songs, it was these twelve only which appeared on CD2. “Many Parts” filled up CD3.

For many years, “Product” had the distinction of including everything the band had taped for United Artists, and even today, I think it is still the only way to get the live recordings on “Many Parts”. It’s a brilliantly impressive set, but with the three studio albums having being expanded in recent years with that old chestnut, “previously unreleased tracks”, and “SGS” having been reissued with extra tracks (and then superceeded by an even later singles compilation including everything the band released on 45 from 1977 to 2004), it’s lost a bit of it’s sparkle. 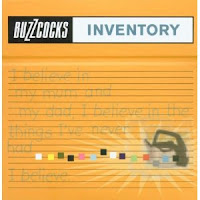 “Spiral Scratch” was reissued soon after it’s original release, and was credited to “Buzzcocks With Howard Devoto”, so people would be aware that this was a different Buzzcocks to the one that had done ‘all the hits’. It was reissued on CD during the early nineties, meaning that it was possible to get (nearly) the entire Buzzcocks back catalogue on Compact Disc by buying this reissue and “Product”. The one missing song at the time was the live version of “Time’s Up”, as included on the Various Artists “Live At The Electric Circus” 10”.

In 2003, EMI released “Inventory”, which was designed to include all of the band’s singles from 77-81 in handily reissued CD form. Not only did it include “Spiral Scratch”, and the 12 UA singles the band had released, but it also included the US-only “I Believe”, released in edited form as a single by IRS in the States to help plug “Tension”.

The CD’s came in their original sleeves, although as some singles had been issued in two or three different covers back in the 70’s, it was therefore impossible for it to tick all the boxes. “I Don’t Mind” included “Moving Away From The Pulsebeat” as a bonus track, on the basis that the latter had surfaced as a promo only 12” at the time - it’s a shame EMI did not include this song on it’s own in it’s own sleeve in the box, something they did do on the Madness Singles Box the same year with the “Don’t Quote Me On That” promo. The “I Believe” disc added the album version, on the basis that the b-side, “Something’s Gone Wrong Again”, had already appeared as the b-side in the UK to “Harmony In My Head”, and was thus already included in the box.

“I Look Alone” was tagged onto the end of the “Part Three” disc, simply because it made sense to do so, and although much of this material can be found on “Product”, “Singles Going Steady”, etc, it’s a great little item, and a brilliant way of getting hold of these singles.

Whilst it may be quick to just buy these two releases and be done with it, I figured I should at least list the individual releases that more or less made up these two sets. For the studio albums, I have detailed the expanded reissues that came out a couple of years ago, as any novices should really go for these. The singles list details the original 7” pressings of the singles featured in “Inventory“. My Buzzcocks collection post-1989 has quite a few gaps, so I don’t feel qualified to talk about it just yet, but I would hope to cover the reunion years at some point in the future. There have also been several other releases post-1989 of pre-1989 material (live albums, Peel Sessions, etc), again, I hope to look at some of these at some point.